Making a sequel is always a difficult task, making a sequel to a beloved Robin Williams movie would seem like an impossible task. Against all odds Jumanji: Welcome to the Jungle is a worthwhile, entertaining sequel that carries on the themes and stories set in the 1995s Jumanji. Building on modern societies love of video games, and nostalgia for 90s video games, Welcome to the Jungle sees the board game transform into a console cartridge that sucks people into the game. Picking up in 1996 after the events of the first movie, a father finds the board game on the beach, gives it to his teenage son, Alex, whose is sucked into the game.

Fast forward to modern time, four high school students are in trouble for various reasons that see them end up in detention. There is Spencer, the nerd, Bethany, the popular princess, intelligent loner Martha and football star Fridge, in a collection of teenagers almost as diverse as The Breakfast Club. In an effort to escape the boredom of detention, the four decide to play an old cartridge based gaming system, Jumanji. After selecting their characters, the teenagers are sucked into the world of Jumanji, a jungle world that has similar rules to 90s video games, and the only way to escape is to complete the game and save Jumanji. The characters the teens chose are nothing like them in real life. Spencer becomes Dr Smolder Bravestone (Dwayne Johnson) a physically imposing, strong leader. Martha becomes the strong, intelligent and beautiful Ruby Roundhouse (Karen Gillan). The giant footballer Fridge has become the small statured Moose Finbar (Kevin Hart) and to the dismay of Bethany, her character Prof. Shelly Oberon is actually a slow fat man (Jack Black).

The strengths of Jumanji: Welcome to the Jungle come from its hilarious and out of character performances. In a Freaky Friday style body swap story we get a fantastic performance from Dwayne Johnson as Spencer, a nervous nerd now in the body of an action star, meaning Johnson must become nervy, unsure of himself and awkward, frequently saying ‘oi vey’. In what might be his best performance since School of Rock, Jack Black does the best out of character performance as High School princess Bethany, stuck in the body of an ‘over-weight, middle age man’. This was an element that could have gone horribly wrong but surprisingly it works. There is much trauma for Bethany, but even more humour when she must ask the other men how to use her penis to urinate. Watching Black teach Martha aka the gorgeous Ruby Roundhouse how to flirt and seduce men may be on of the best moments of the film. Karen Gillan also does a fantastic job being an awkward teenager, who feels extremely uncomfortable with what she is wearing, highlighting the sexist way woman are portrayed in video games through humour. The dynamic between Bravestone and Roundhouse lends itself to some of the most awkward acting between two very attractive and confident people, leading to perhaps the best and most awkward on-screen kiss of the year. 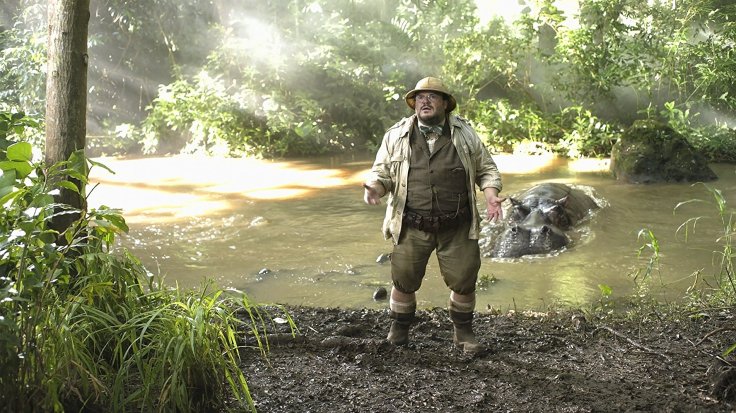 The quirky nature of the film makes it a lot more hilarious than its predecessor, that may hurt the longevity of this sequels legacy, but it does make it a very fun movie to enjoy. The video game elements make for an entertaining adventure story, full of clever humour and fun action sequences, with some interesting 90s lingo throwbacks that will make you question any nostalgia for that decade.

If you are looking for an easy to watch fun time at the cinema, then check out to Jumanji.

Jumanji: Welcome to the Jungle scores a 7/10

5 thoughts on “Jumanji: Welcome to the Jungle Review”