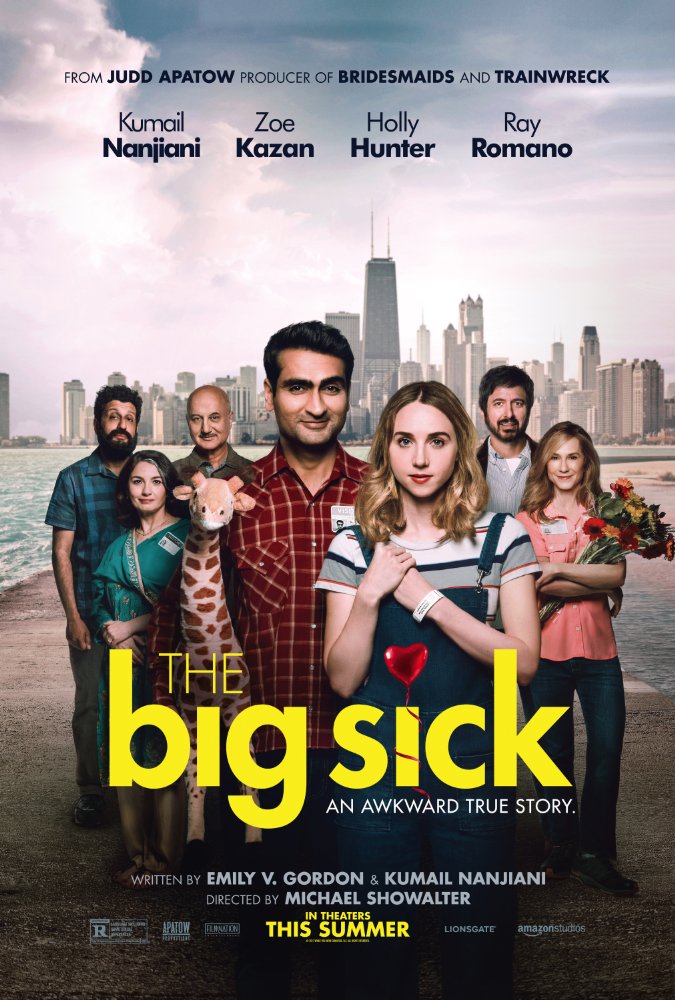 Based on the real life story of how Kumail Nanjiani and Emily V. Gordon fell in love, comes The Big Sick. Kumail is a Pakistani born stand up comedian, who after his performance decides to talk to a woman who made a noise during his set. One thing led to another and they end up back at his place. What was meant to be a one-night stand begins to grow into a relationship with one problem, Kumail can’t tell his strict Muslim family about Emily because they want him to marry a Pakistani girl. When Emily becomes seriously ill and is placed in a coma, Kumail must navigate the medical crisis with the awkward situation with meeting Emily’s parents for the first time. If you think that story sounds too crazy to be true, that’s exactly why Kumail and Emily decided to turn their crazy story into a movie. The Big Sick was directed by Michael Showalter and stars Zoe Kazan, Kumail Nanjiani, Holly Hunter, Ray Romano, Anupam Kher, Aidy Bryant, Bo Burnham, Kurt Braunohler, Adeel Akhtar.

The cast of The Big Sick are fantastic, with everyone giving a great performance that makes it an engaging and wonderful viewing experience. It should go without saying but Kumail is excellent as himself, but not only doing the comedy but the dramatic moments too. Kumail isn’t known for his dramatic work but he definitely knows what he is doing with the way he blends it so naturally with the comedy. The dynamic between Kumail and Emily’s parents Beth (Hunter) and Terry (Romano) contains such realism, with the awkwardness of meeting in-laws combined with the stress of Emily’s illness. Holly Hunter shines as Emily’s mum, a woman stressed by what is happening to her daughter, whilst balancing meeting Kumail and trying to find a way to cope with everything else. Ray Romano ads some brilliant comedy work that will have the audience laughing out loud, but can also bring some serious dramatic moments also. It is a shame that Emily spends so much time in a coma, because Zoe Kazan is a fantastic actress with so much charm, humour and realism to the character. It must have been tough for her having the person she was playing on set but she really does do an amazing job.

The fact that The Big Sick is based on true events works extremely well in its favour; there are no cliché love story moments or melodramatic problems between the couple, the coma excluded but that works due to the truthful nature of the story. The film is full of couple moments that most couples will be able to relate too and that lead the audience to engage with the characters on a deeper level.

I am going to praise Kumail and Emily’s writing of The Big Sick more than anything in this review, as it is the reason that this movie works as well as it does. The idea of a Muslim immigrant from Pakistan experiencing cultural differences with his Caucasian girlfriend could have been a movie with overt political themes. The film is confronted with some deep political issues surrounding racism and culture, without forcing a political agenda. In fact the movie is apolitical despite its subject matter and it works fantastically. Kumail’s ethnicity is apart of his character but not a plot point to show audiences that racism is bad. The Big Sick shows respect to the subject matter and to the audiences’ intelligence that they do not need to have this message forced on them. The scene at the comedy club where someone calling out racial slurs, trying to heckle Kumail, is more about the story and character development than making a statement about society.

It is rare to see a movie explore relationships in this manor and still feel real, recent trends in film and television is to portray relationships where the man is emasculated by his partners success or the wife cheats because her husband is never around. What makes The Big Sick stand out even more is the fact it was written by the two people who lived through this and have successfully built this relationship together. Kumail and Emily wrote an amazing script that explores what it is like to be in a relationship, not some over exaggerated Hollywood relationship where no one is actually happy. The Big Sick also explores the differences and similarities between the relationships of previous generations and relationships in modern times. This offers fascinating insight into some of the characters in their deeper moments.

I did not expect to love this movie as much as I did and that is a credit to the fact it is a well-made romance story. The Big Sick perfectly tells the way two people fall for each other and some of the problems that can occur in a relationship, it just so happens that their problem revolved around a coma. The film perfectly blends the romantic element with the comedy and the drama to create an entertaining and emotional experience for the audience. The Big Sick may be one of my favourite movies of the year and it is definitely the best comedy of 2017 this far.

See it! Perfect blend of romance, comedy and social issues that is a great time at the movies. The fact that this is a true story makes the movie even better.

Thanks for reading my review of The Big Sick. What did you think of the movie? Do you agree with me that it is the best comedy of the year? Let me know in the comments section below.

8 thoughts on “The Big Sick Review”