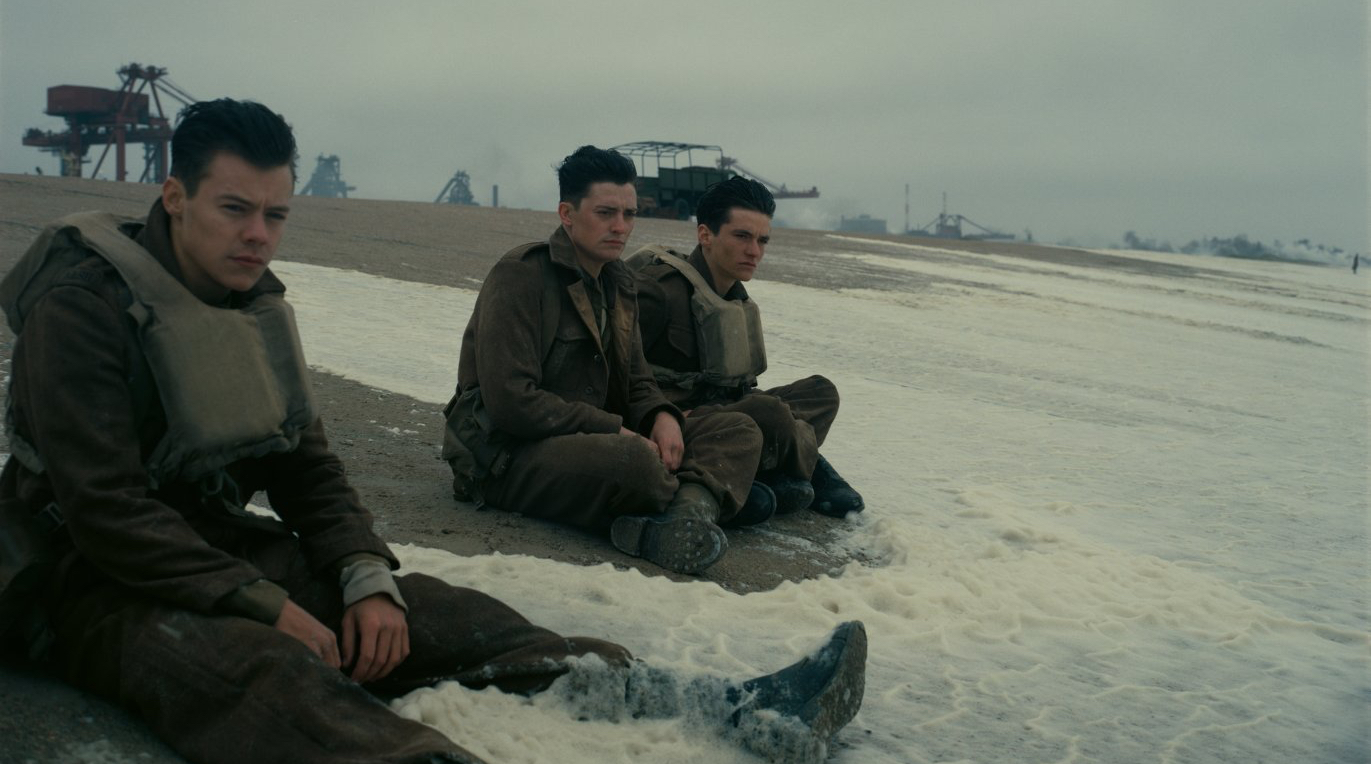 From the horrors of World War II and the mind of director Christopher Nolan comes the new war film, Dunkirk. In 1941 Allied forces had been driven out of France by German troops to the coastal town of Dunkirk. This meant that 400,000 British soldiers were trapped on the beach with no way to get home. With the Germans attacking by land, sea and air, destroying the British Naval ships that were trying to get the troops back to Britain, a call goes to all to send civilian vessels across the channel to rescue the stranded soldiers. These historical events were a major point of the Second World War. Directed by Christopher Nolan, Dunkirk stars Tom Hardy, Cillian Murphy, Harry Styles, Mark Rylance, Kenneth Branagh, James D’Arcy, Fionn Whitehead, Jack Lowden, Aneurin Barnard and Tom Glynn-Carney.

What Christopher Nolan was able to achieve as a filmmaker with Dunkirk was nothing short of incredible. He shot a large portion of the movie with an IMAX camera and also using 70mm film stock to create a film that is visually impressive to look at. This might not mean a lot to some people but basically it means the picture is clearer and larger. This is one of those rare cases I say that the movie should be seen in IMAX to full appreciate what Nolan is trying to create. The sequences when the film was shot at night or in the dark look incredible, with the picture offering a clarity not often seen in similar scenes from other films. Though the way the movie was shot is not the only impressive aspects of the movie. Nolan made the decision to not create a dialogue heavy movie to tell the story. Most of the characters do not often speak and there are no scenes with massive exposition explaining what is happening. The scenes with the most dialogue were when the characters felt safe, when they thought the conflict was over for the time, which is probably a reality of war. Nolan also made a creative story telling decision that I think paid off but it may take some audience members out of the movie. It by no means ruins the movie; in fact I think it enhances it. I have written a paragraph at the bottom of the review for people who wish to read about this, for those who want to stay away from any potential spoilers make sure to head the spoiler warning.

Besides the phenomenal visuals, the other aspect that elevates Dunkirk to another level is the musical score. There is barely a quite moment in the film, with a consistent score playing and expertly building tension. Hans Zimmer skilfully uses the score to keep the audience engaged, never given them time to rest as music plays throughout the whole film. The way the music is used to create tension, rather than using imagery or dialogue was pure genius and something Zimmer did expertly. After leaving the cinema I realised there was only two ways to score Dunkirk and that is the way Hans Zimmer did, or with no score at all and have it be silent.

The cast of Dunkirk is fantastic, in particular Fionn Whitehead and Harry Styles, who are the two with the most screen time. This movie is full of exceptionally talent actors who give great performances, with every single character being believable. Before people jumped down at the idea of a member of One Direction giving a strong dramatic performance you should see the way he carries the weight of the war on his shoulder, the fear of being a coward for running back to England and the shame associated with the loss in France. He is much more than a gimmick and I expect to see much more of him in dramatic roles in the future. Cillian Murphy is another incredible talent that shines in Dunkirk, as a stranded survivor suffering from shell shock, and you would believe he was a man who had seen too much war. He is another character with few spoken lines but a massive impact on the film. Tom Hardy has a pivotal role in the movie, despite not being in the movie a great deal. In typical Hardy fashion most of his face is hidden behind a mask, but this only further highlights just how talented he is, as he must act using mostly his eyes. There were 400,000 soldiers trapped on the beaches at Dunkirk, and Christopher Nolan uses his cast to highlight the types of men who were stuck there, and highlight the effects of war.

People are stating that Dunkirk is not a war film, which is categorically false; it is definitely a war film but not the non-stop shooting action type of war film. This is made in a similar vain of movies like Apocalypse Now, Platoon or Jarhead, which show a different side to war whilst also showing the violent side. Nolan decided to not make a gratuitous movie; we still see death but nowhere near the opening sequence of Saving Private Ryan. That had a shock and awe feel, where as Dunkirk is a movie that builds suspense, not knowing how it will turn out for the characters. The movie also deals with some deep themes of war regarding cowardice, bravery, duty and self-sacrifice. Harry Styles character is distraught at the idea of being viewed as a coward, not so concerned with his life but the shame of retreat. Cillian Murphy is referred to as a coward as he refuses to return to Dunkirk. These are themes often over looked in modern war films, the toll that war takes on a person, both physically and mentally. Nolan created Dunkirk as an incredible War film that goes beyond the standard action film and the concept of good guys and bad guys.

Dunkirk is a phenomenally well-made movie, with a great cast, great themes and impressive score. I found myself engaged for the larger majority of the movie, concerned for the characters safety and holding my breath during the underwater scenes. I have been critical of some of Nolan’s recent films but this movie has me back on the bandwagon, he should definitely be receiving some accolades come award season. Dunkirk may be in my top 5 favourite movies of the year so far.

If you are a fan of War films then see it. It is not an action war film but it is definitely a war movie. This is also a movie that needs to be seen in either IMAX or 70mm print so do yourself a favour and see it in those formats. Any Christopher Nolan fan should see Dunkirk but if you are a fan then you probably have seen it already.

Thank you for reading my review of Dunkirk. What did you think of the movie? Which format did you see it in? Let me know in the comments section below.

Dunkirk is shot with a non-linear timeline, where the story on the beach (the Mole) takes place over a week, the sea story of the Mark Rylance and his boat is over a day and the Air story of Tom Hardy in the plane is over one hour. The story will move at different speeds with these characters moments not always synchronised. I worked this out at about the midway point of the film and was able to accept the directorial decision made by Nolan. This is only a mild spoiler but I would hate to ruin this for anyone, as I believe it helped the story by allowing each faction with in the story to receive equal treatment.