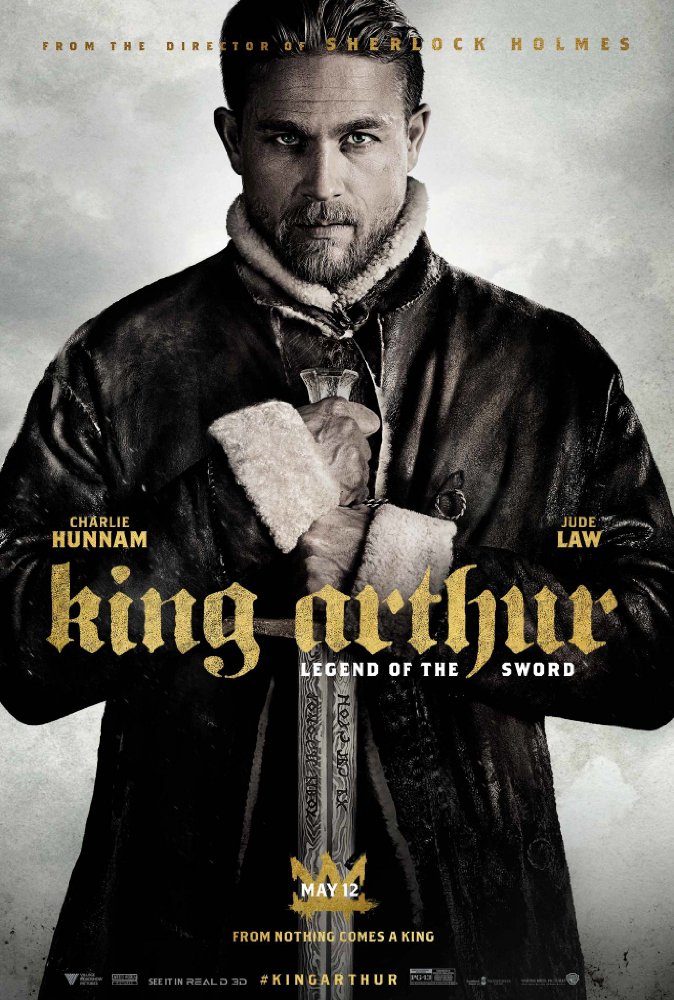 This is a Guy Ritchie movie through and through so if you do not enjoy his style of filmmaking or screenplay you might not enjoy this but if you do, King Arthur Legend of the Sword is a fun ride. This is a more mythical look at the legend of King Arthur, unlike the 2005 version where he was a Roman captain; this involves the battles between Man and Mage that includes the magical sword Excalibur. After Arthur’s father was betrayed by his brother Vortigern, Arthur survived by being raised in a brothel where he grew up to be a streetwise gang leader on the streets. When the sword in the stone reveals itself it is up to Arthur and a band of rebels to return the rightful king to his throne. The movie stars Charlie Hunnam, Jude Law, Djimon Honsou, Aidan Gillen, Eric Bana and Astrid Berges-Frisbey.

This is not like any Arthurian movie seen before, and maybe that would put people off of seeing it but this is a Guy Ritchie movie set in medieval times. The movie was pitched to Warner Brothers as Lord of the Rings meets Snatch and that is exactly the best way to describe King Arthur. Charlie Hunnam’s Arthur is a cockney lad from the streets of London where everyone calls him boss and he learns martial arts from a Chinese man called George. Under any other director that would sound ridiculous but when you embrace Guy Ritchie the movie becomes a lot more fun. The time jumps and fast moving dialogue are a particular stand out of the movie, with a particular scene of Arthur explaining why a plan wont work feeling exactly like something Guy Ritchie would shoot.

What the movie lacks is a strong story, because this story has been told so many times from previous King Arthur incarnations to Hamlet to the Lion King. So rather than try and change the overall narrative Guy Ritchie put his flavour into the film. This does hurt the movie as it can feel slow in parts and under developed in others. As they say, when it works it works but when it doesn’t it falls flat. There are some character development issues as well as particularly with the two female characters who did not get the development they needed to be strong characters. It would appear that their roles would have been more substantial in the sequel, which will probably not happen and that is unfortunate for them. It is not just the female characters that require development as many of the characters lack motivation for their actions and we as an audience do not really care about many of them.

For a movie that cost $175mil to make it is astounding how ordinary some of the CGI looked. There were some moments when Arthur used Excalibur that looked incredible whilst others looked like a bad cut scene from a video game. The final fight between Arthur and Vortigern (Jude Law) looked like a boss battle rather than an epic fight sequence. The scene with the giant snake was also a let down despite the fact I was still terrified because of my fear of snakes. The snake left a lot to be desired in terms of the graphics.

I have been a fan of Charlie Hunnam since Green Street Hooligans, and Sons of Anarchy would be one of my favourite shows ever. That being said I can acknowledge his weaknesses when it comes to acting, no one was raving about his performance in Pacific Rim after all. He gave a strong performance in this movie as the reimagined King Arthur, handling the action and the acting extremely well. He is not the problem with this movie at all and in fact I would say he shines under the direction of Guy Ritchie. I would love to see him and Ritchie work together again in a street movie similar to Rock n Rolla or Lock Stock and Two Smoking Barrels. A smaller movie with those two would be an amazing film I believe and I think Hunnam may need to focus on smaller roles to build up some more acting credibility.

Marketing for this movie has been terrible which would explain why it has failed to make any money at the box office. Guy Ritchie is known for his style of films but this is a hard sell given the medieval setting with modern day treatment. The reason this worked for Sherlock Holmes is due to the star power of Robert Downey Jr, the audience are drawn in by his name and unfortunately for Charlie Hunnam he is not a bankable star yet. You can’t stick Charlie Hunnam on a poster and expect everyone to know who he is and want to rush out to see his new movie (despite how awesome his abs are).

This movie is a classic example of remake versus re-imagining. Guy Ritchie has taken a known story and added his flavour too it. Is it a great film? No but it is a lot of fun and if you are a fan of Guy Ritchie I would recommend this movie too you. It is a shame we wont get to se a sequel despite the fact the world that Ritchie has built on is full of rich stories and legends.

Check out King Arthur if you are a fan of Guy Ritchie’s style of film making as this is a very Guy Ritchie film, but also if you want to have some fun watching a movie that is not too serious.

King Arthur Legend of the Sword scored a 7/10

What did you think of King Arthur? Let me know in the comments section.

Don’t forget to subscribe to stay up to date with everything happening at Millennial Movies.

2 thoughts on “King Arthur: Legend of the Sword Review”